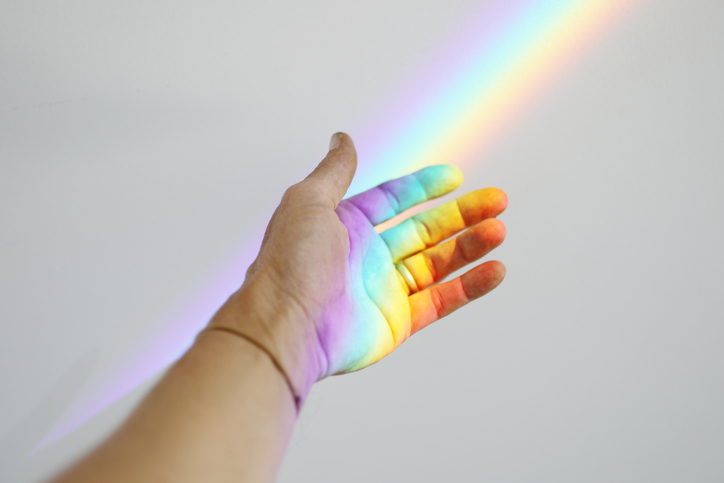 More people than the general public might imagine are colorblind: As many as 1 in 12 men and 1 in 200 women are colorblind worldwide, with varying levels of colorblindness. Colorblindness is caused by abnormalities in the eye’s three types of cone photoreceptors. Colorblindness isn’t a binary condition. Instead, it comes in varying degrees, from mild difficulty in distinguishing different colors, usually red and green, to a total lack of color vision.

Tech to the Rescue

The wonders of the future are here: Colorblindness will surely be cured in yet another scientific miracle. Right?

Not entirely. There are no cures for colorblindness. However, there are products that can help mitigate the effects of the condition. These products’ results vary in their efficacy for wearers, but in general they’ve led to positive reception in the public, though less in scientific communities.

Take, for example, EnChroma, the popular colorblindness-treating glasses developed in California. The glasses don’t do anything to the eye — rather, they use a clever combination of rare earth materials to filter out certain colors’ wavelengths. This leads wearers to more easily distinguish colors.

So, do they work? The resounding answer is: Not really. While the glasses won’t allow colorblind wearers to see new colors, they’ll be able to see colors, especially red and green, in a different way — with more contrast. However, this may come at the detriment of other colors and does not lead to a fundamental improvement in eyesight.

Crucially, a study (1) indicated that the glasses do not improve color recognition in classic colorblindness tests like Ishihara (recognition) and Fansworth-Munsell (arrangement). Furthermore, the same study showed that wearers showed little to no subjective improvement in color distinction when wearing the glasses.

The company recognizes this, and points out that the glasses shouldn’t be worn to pass occupational colorblindness tests. So, those who are colorblind can’t rely on the glasses if they need them to work. The company further recommends avoiding wearing the glasses at night, since they can reduce the light from certain wavelengths.

VINO glasses, another popular option on the market, have similarly been shown to not improve overall colorblindness symptoms. While the glasses did help some wearers pass a color recognition test, it did not help them pass an arrangement test. Researchers came to the same conclusion (2) with VINO they did with EnChroma: The glasses do not fundamentally ‘fix’ colorblindness, though they may improve mild red-green colorblindness by improving contrast.

In short, wearers shouldn’t assume these glasses will ‘cure’ their colorblindness. They’re step in the right direction, but not a practical medical treatment.

What About Future Tech?

The future may hold promise for improved technology to help mitigate the effects of colorblindness. However, at the moment that technology is either clunky or underdeveloped. Given more time, however, the optimists in the optic world believe colorblindness will become treatable.

There’s an issue here, however: The device is fairly large and isn’t a practical tool for everyday use. Until miniaturization of augmented reality is a reality, this device will remain impractical.

Speaking of miniaturization of augmented reality, several tech titans have thrown their hat in the ring. Sony, Samsung, and Verily (Alphabet’s life sciences division) are all developing smart contact lenses that will come with augmented reality. Colorblindness amelioration is just one of the applications of these lenses: Others include automatic vision focusing, video recording and a heads up display featuring, for example, biomedical information.

So, Where Are We?

All signs indicate that colorblindness treatments are still in their nascent phase, with many improvements left to be made. Those who are colorblind will still have to live with the condition, though treatments will steadily enter the market — especially considering how many suffer from colorblindness.