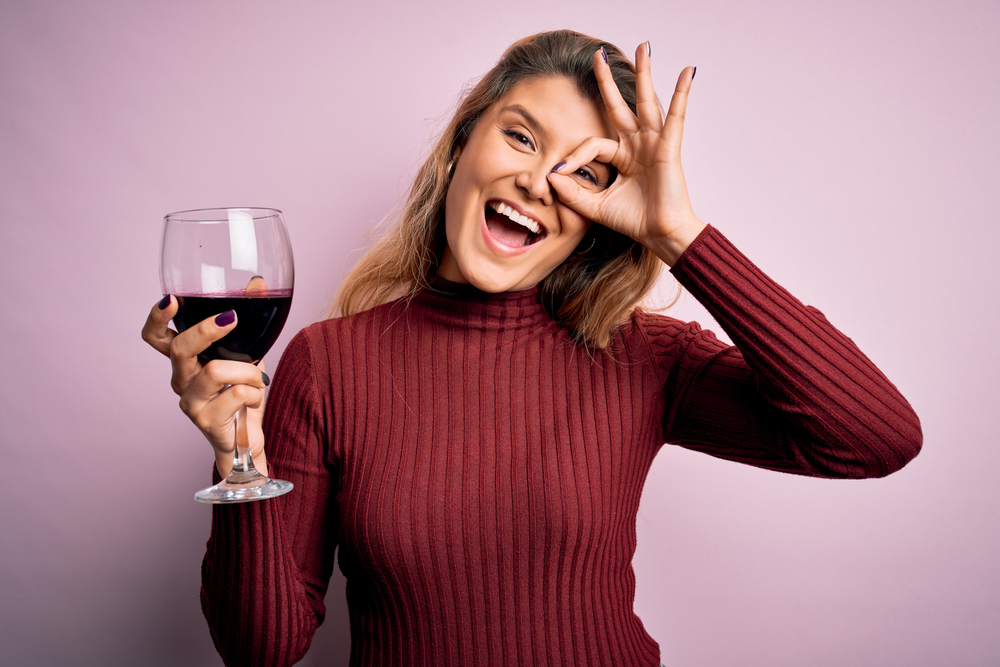 Good news for wine lovers: Evidence that wine may reduce the risk of developing cataracts has moved rapidly through the grapevine to hit headlines around the medical blogosphere, and we can hardly bottle our enthusiasm. The study in question¹ was published in Ophthalmology, the journal of our good friends at the American Academy of Ophthalmology (AAO).

Distilled to its most basic point, the idea is this: Drinking a moderate amount of red wine (6.5 glasses per week, officially) was linked to a reduced prevalence of cataracts in UK adults. Although anything more than moderate drinking is dismissed by researchers and governments as sour grapes, the moderate consumption of alcohol — especially red wine — appears to be beneficial for eyes due to antioxidants.

Apologies — we’ll put a cork in our wine puns for now. Generally, if one mentions one is having a glass of wine for the antioxidants and not for the taste, the statement is received with sage nods and grunts. In this case, the nods and grunts will come from the direction of British researchers who conducted an absolutely mammoth study including nearly 500,000 adults.

That oxidation is a major cause of cataracts is no secret.2 So, connecting the dots between antioxidants and reduced cataract risk does not really stretch the imagination.

But the term “antioxidants” is vaguely understood in the general public — with researchers appearing to tiptoe around the idea so as not to overwhelm non-medical types with too much information.

In this case, researchers suggested it was the polyphenols in red wine that appeared to be the most valuable component in preventing cataracts. This, again, is not really news: A 2011 study3 linked polyphenols to a potential for reduced cataract development in diabetic patients. More recent studies4 have shown polyphenols can be a valuable ally in the fight against all sorts of eye diseases, including age-related macular degeneration and glaucoma.

Polyphenols are found in all sorts of plant matter, including unfermented grapes. However, it appears to be much easier to convince people to consume grapes after they’ve been fermented.

Drinking wine for health benefits is certainly a popular concept in pop science. But there is actual research and data behind it, of course, which we’ll discuss in brief now.

The Dregs of Data

For those in the public, sifting through the data is about as fun as filtering wine dregs through one’s teeth. For those in the medical community, this is where the fun begins. But we’ll keep it light for now.

The research covered nearly 470,000 participants in the UK biobank and around 23,000 in the European Prospective Investigation of Cancer (EPIC) study. The mean age for both was in the upper 50’s: 56 in the Biobank and 59 in the EPIC study.

The researchers compared self-reported drinking habits and compared them with the incidence of cataract surgery. What they discovered was a strong correlative, but not causative, link between moderate wine consumption and a reduced risk of cataract. Beer and other alcoholic beverages also led to a lower risk of cataract development than baseline, though they appear to be less effective than wine.

In the EPIC study, those who drank a glass of wine several days a week showed a 23% lower risk of developing cataracts compared to those who abstained or drank other alcohol. In the UK Biobank study, the same number was 14%.

Don’t Get Too Excited, Now

There are plenty of other things to establish before we can be sure that it’s the wine itself that’s leading to the reduced risk of cataract. To establish a causal effect, the mechanism of polyphenols and their interactions with ocular tissue, for example, would need to be fully elucidated.

But for now this is a fun and interesting study that will likely get shared by wine lovers as yet another reason to drink their elixir of choice. We’ll raise a glass to that.